The Frisian Horse is an old breed and direct descendant of the primitive European Forest Horse. In the past the Frisian Horse used to be very different from the Frisian Horse as it is known nowadays. They were more bulky and appeared in all kinds of colours. As the Eastern Horses (Arabian, Andalusian) were crossed, a lighter type 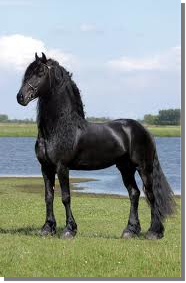 The Frisian horse is always plain black; any differences in colour are forbidden.

The high neck of the Frisian Horse, which stands perfectly on the broad, long shoulders and nicely pronounced withers, carries a large, yet light and expressive head with expressive eyes and agile ears. The body, which consists out of a quite heavy skeleton, is compact with a short and powerful back. The crotch runs slightly sloping down and the elegant tail is quite low. The immensely luxuriant, slightly wavy mane and tail need to be kept long! The 'dry' legs with their healthy, solid joints, are heavily hairy at height of the ankles. The hoofs are tough and nicely curved.